Some 60 lots came under the hammer, with a larger than usual selection of pre-war machinery on offer, 24 of which had been delivered to their first owners before the outbreak of war and over 75% of these found new homes 80 years later.

Top price of the day however went to a stunning 1976 Ferrari 308 GTB. Its new owner paid £123,000 for the pleasure of becoming it’s second owner, the first having acquired it direct from Maranello in 1977. One of just 154 built in RHD, and an early dry-sump Vetroresina model to boot, it’s originality and massive history certainly justified the enthusiastic bidding which took the result way beyond top estimate.

Austin Sevens had a good day too, with all five finding new homes. Two Chummys imported from New Zealand were on offer, one yet to be UK registered and one with a V5C sold for £9,900 and £11,660 apiece. Of the two specials on offer, a barn-find creation which had last seen service in the ‘50s made £6,160, no doubt due to its original Ulster bodywork and a superb 1929 special with pre-war history and Frazer-Nash style front axle made an estimate-busting £19,250.

Further strong pre-war results were realised from the 1936 Railton Cobham Saloon, which even with a declared engine noise made £24,750 against an estimate of £15,000 – £18,000. An Australian import Alvis 12/50, with non-original Beetleback body from the ‘60s sold well at £33,000 and a wild 1934 Chevrolet special, sporting over 300 louvres on its unique polished aluminium bodywork, but lacking UK paperwork, was sold to an American buyer for £17,600.

It is unusual to offer cars manufactured during the war, although two were sold after intense bidding battles on both vehicles. The pretty little 1942 Lancia Ardea created a lot of interest, offering what is in effect 90% of an Aprilia for 30% of the cost, bidding finally coming to halt at £11,550. The Jeep, also from 1942 had been beautifully restored and was well worth every penny of the £19,800 paid.

For the agricultural enthusiast, the grey Fergie was hotly contested to a near record £5,610, no doubt spurred on by its full engine rebuild, fresh hydraulics and superb paint-finish. A very smart Riley RMF which was driven to the sale on the hottest day of the year made £16,280 and one of the best BMW 2002Tii we have ever seen flew past top estimate to sell for £27,500, showing that the market will pay for the very best.

Buyers are well versed with the costs of restoration, wisely choosing to pay top price for beautifully restored examples. One such example was the stunning Austin A60 pick-up, restored to near perfection even down to splitting the rear tailgate to bring it to as-new condition. One of the surprises of the sale, it was sold for a whisker under £19,000, surely a record for such a model, yet still a fraction of the cost of restoring an ‘also-ran’, if indeed you could find one.

Of the more modern offerings, the Aston Martin DB7 Manual, with 53,000 miles on the clock was hammered away for £24,750 bringing to close another successful day for Brightwells’ Classic Car team.

“As usual, we presented a huge diversity of vehicles, building on Brightwell’s ability to offer something to suit every taste. Our team of Consignors are truly enthusiastic about what we sell, with a huge range of knowledge and experience from the Vintage era right through to the latest cult in Modern Classics” said Brightwells’ MD Richard Binnersley. “We were delighted with the results of the sale and we thoroughly enjoyed the whole experience, as did the hundreds of enthusiastic bidders who attended. The atmosphere created around the Flywheel event, in the magnificent surroundings of Bicester Heritage was truly something to savour and we felt privileged to be playing our own part in the development of this marvellous venue, which is fast becoming the most exciting hub of the classic car movement in Europe”.

“We can’t wait to return for our next auction on 25th October and already have some fascinating cars consigned. Space will be limited to about 100 vehicles, so if you have anything interesting that you wish to consign, please contact us sooner rather than later or your entry may have to be deferred until next year.”

The prices achieved include buyer’s premium.

Brightwells’ next Classic and Vintage sale is on 12th July 2017 in Leominster and entries are now being taken for our next Modern Classic sale on 17th August and our Leominster Classic on the 27th September – free valuations is available by emailing. classiccars@brightwells.com 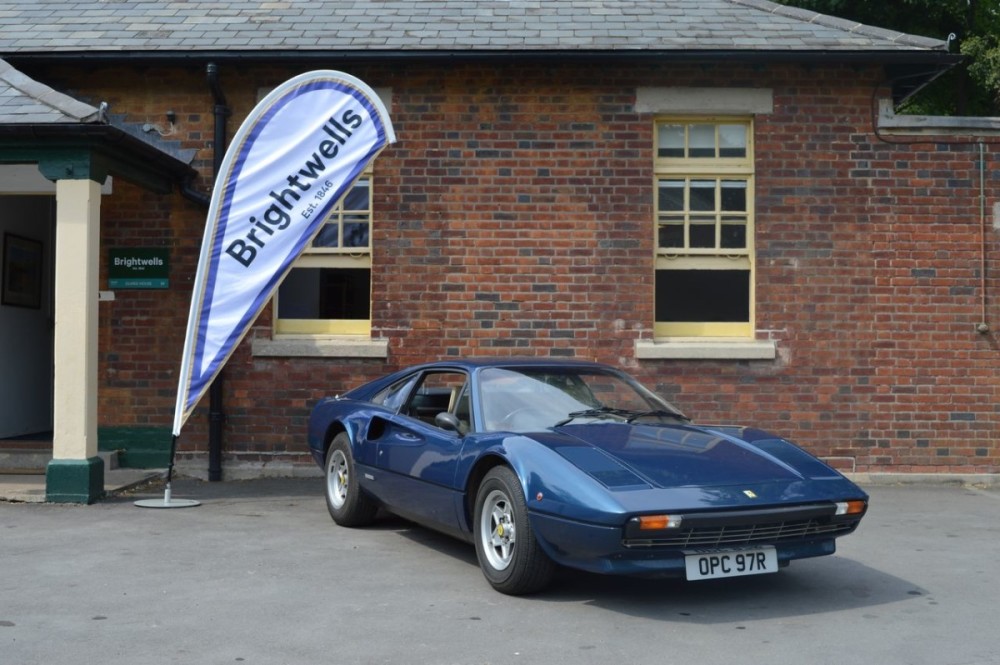