We are delighted to announce that Bicester Heritage has been shortlisted in the Industry Supporter of the Year category at the prestigious 2014 International Historic Motoring Awards. We are also thrilled to reveal that our very own Managing Director, Daniel Geoghegan, has been nominated for Personal Achievement of the Year.

The full shortlist of contenders was recently revealed in Octane Magazine and online. The well known awards were first launched three years ago and have swiftly become a major fixture in the historic vehicle world, attended by the good and the great of the industry. This years’ master of ceremonies will be the well known television presenter Tiff Needell, with a panel of judges (including famous faces such as Jay Leno and Nick Mason, along with industry specialists, car designers and journalists) selecting the evenings’ winners. 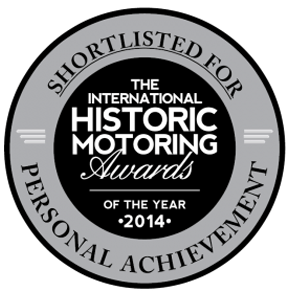