The Vintage Sports Car Club’s (VSCC) 2014 season culminated in the Winter Driving Tests at Bicester Heritage on Saturday 6th December. Some 87 entries arrived to a crisp, clear blue morning and an icy temperature of -2 degrees celsius. The milky sunshine seemed unable to shake off the thick frost, a delight to many entrants who were soon pirouetting their four wheels around cones on the Bicester Heritage test track.

The assortment of complex tests designed by Mark Elder of The Motor Shed Ltd challenged the entrants who each went about them in their own fashion. From blasting across the holding pans and flicking the handbrake to precisely picking their way between the cones with style. The courses were spread across the full 348 acres of the base, including the Technical Site, where competitors dashed between hangars, blast shelters and the recently restored homes of the Bicester Heritage specialists.

With a variety of vintage machines zipping between tests a group of doctors based themselves in the Guard House to kindly give up their time to conduct medicals for over 70 VSCC members. Each medical was ‘charged’ at £75 with the proceeds going to three chosen charities. Many patients paid more than the agreed fee and we were delighted that our chosen charity, Mission Motorsport, was included alongside Practical Action and Women for Women. In total they raised £6,215, with £2,680 going to Mission Motorsport. May we offer hearty thanks to those that donated so generously and also to the VSCC, the competitors and spectators who made Saturday’s event such a spectacular end to the 2014 season. 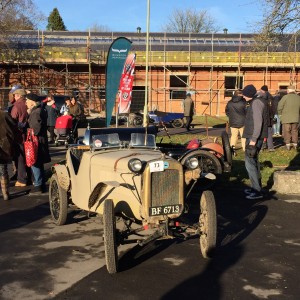